In response to The Daily Post’s writing prompt: “Papa Loves Mambo.” What sort of music was played in your house when you were growing up? What effect, (if any) did it have on your musical tastes? 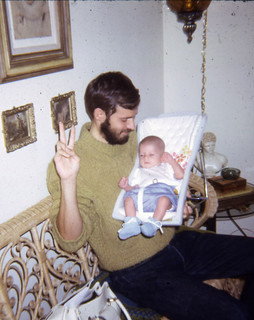 Music was flowing through the house more fluidly than water. The way my mom remembers it, my brother and I used to ride my dad’s Gibson guitar like a horse. I learned to play on that thing, carefully plucking the high 3 strings with a G note on the high E. It really was a G chord but before I took a lesson from my dad, it was just some ethereal staccato sound made into an open chord. When I teach younger kids guitar now, I always share that pattern of picking I discovered/invented on my own by simply “playing around” on my dad’s guitar.

Early on my parents exposed me to Kenny Rogers. He was my first real influence on playing and singing. I learned and performed “The Coward of the County” or my 4th grade talent show. For decades after that, people would tell me they remembered that. My parents were also big into John Denver, Jim Croce, James Taylor, and Neil Diamond. The poets/songwriter types were in heavy rotation but of course they played other music. Bluegrass came later and I learned the classic “Under the Double Eagle” that would be forever etched into my style. I owe a lot of my musical prowess and understanding to my parents but at about age 13 I began to explore my own favorite artists.