This film works quite well as a regret piece. As a teacher, I have plenty of these. The kids I hear about who slipped through the cracks, got into crack or other drugs and somehow never made it in life. Nick Cage’s character wonders what more he could have done. The truth is, in any human endeavor or job you lose some. 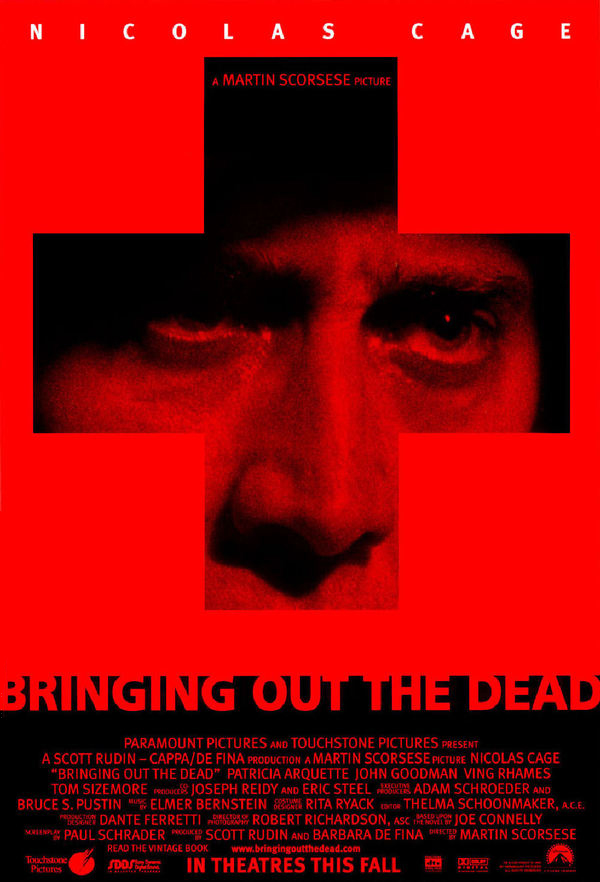 Bringing Out the Dead

“Haunted by the patients he failed to save, an extremely burned-out Manhattan ambulance paramedic fights to maintain his sanity over three fraught and turbulent nights.” -IMDB

Director Martin Scorcese has done more for film than most living directors of our time. Who can forget his Taxi Driver or more recently, Hugo. His work spans the human spectrum and always brings us men who have a vision of themselves they try to live up to, with mixed results.
Nicholas Cage and Ving Rhames are in this film. They make a great duo in the parts they do together. Rhames is the tough free-spirit who tries to get Cage’s character to cope and adapt. They never go away, the ones you lose.

This film is like a dream. It consists of a simple premise: a medic is haunted by the patients he couldn’t save. You might argue it was the first protagonist who could say, “I see dead people.” In the end, we are left with more questions than answers. I like that sort of film, it makes you work. Finally the conclusions are yours and the film helped you get there on your own.

This is not a feel good film but it weaves a web of somber moods that present a point of view. The mystery of death is approached but never addressed. It’s more about those left behind and how we can get stuck in depression and regret when people die, robbing us of our own happiness.

FINAL THOUGHTS
This film is one that makes you think. Due to the nature of its premise there are sections that drag on a little. There are also things that are not explained which can be frustrating. I recommend it for its content but also simply because it is a Scorcese piece.

–
My review Bringing Out the Dead (1999) appeared first on Riley on Film.