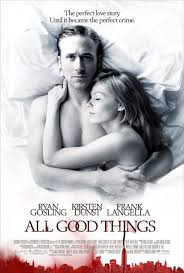 This film is long and tiresome but it has some interesting aspects. It is based on a true story. The main character was tried and convicted for murder as well as the improper disposal of a body.

The story is basically centered upon the protagonist who marries the Kirsten Dunst figure. His family is a group of real estate tycoons and unfortunately for her, a very “The Firm with Tom Cruise” sort of group. After she finds out she will probably never be able to pursue a career being married into it, she has an abortion and tries to divorce the protagonist. Shortly after that, she goes missing. She has not been discovered since.

While I disliked this film, it is possible you may like it. I found handfuls of reviewer who said the acting was worth the ticket so don’t take my word for it. The reason I did like some of it was because it was indeed a true story.

I suppose toward the end it held my interest but I have to say there is a reason Netflix has it at 2/5 stars. As for my rating? I give it: